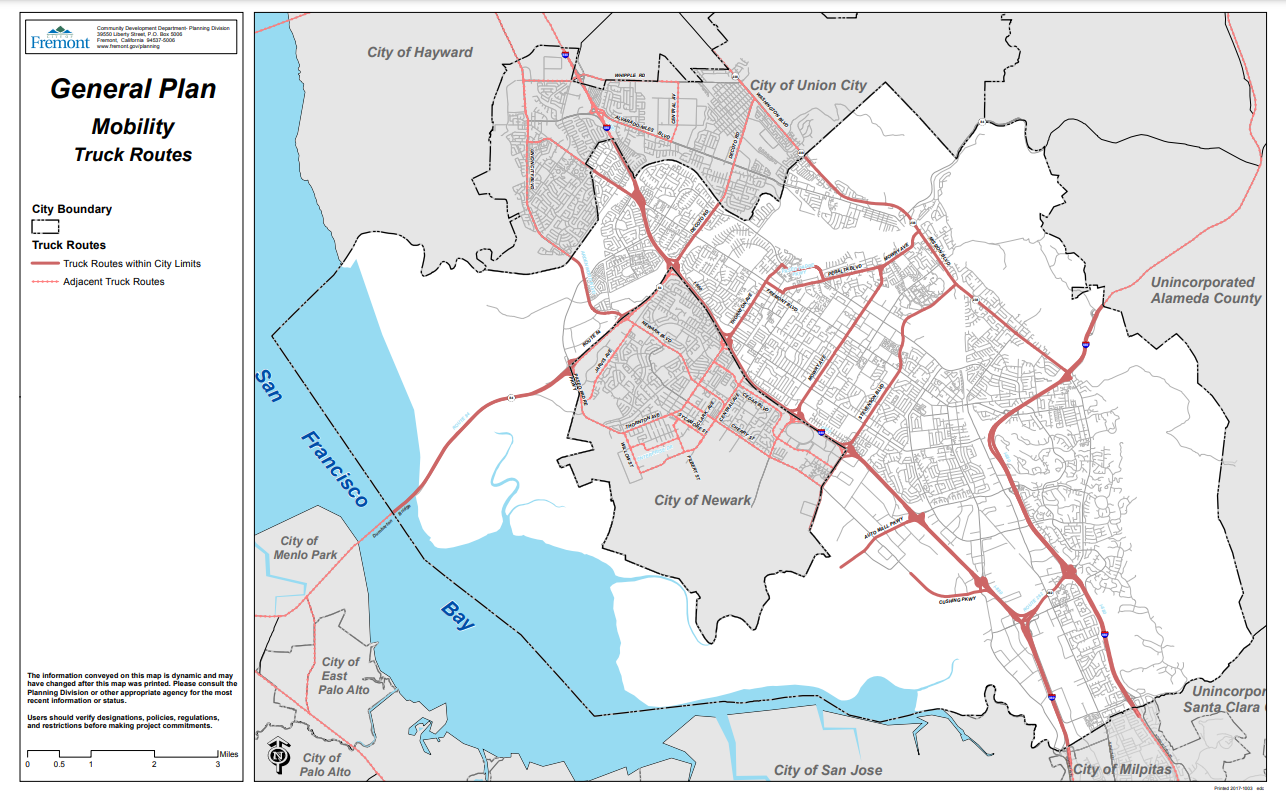 Section 21101 allows the restriction of certain vehicles, by stating that, "Local authorities...may adopt rules and regulations by ordinance or resolution... (c) Prohibiting the use of particular highways by certain vehicles..." CVC Section 21104 further states "...an ordinance or resolution which is submitted to the Department of Transportation...in complete draft form for approval...is effective as to any state highway..."

Section 35701 allows restriction of vehicles by stating that, "(a) Any city, or county for a residence district, may, by ordinance, prohibit the use of a street by any commercial vehicle or by any vehicle exceeding a maximum gross weight limit...(b) The ordinance shall not be effective until...signs are erected...(c) No ordinance...shall apply to any state highway...in the National System of Interstate and Defense Highways, except (that) approved by a two-thirds vote of the California Transportation Commission."

The following clarification to the rules restricting heavy trucks to “truck traffic routes” is provided in accordance with the settlement terms of Devenceze v. City of Fremont, et al. (N.D. Cal. C020046CRB). This case challenged the City’s authority to designate truck routes and control the movement of trucks off of truck routes. The case was settled without a court deciding the merits of the plaintiff’s challenge. The settlement terms require that the city allow limited travel by heavy trucks off of the truck route as described below. All other terms and provisions in the Fremont Municipal Code governing heavy truck traffic remain unchanged and in full force and effect.

When appropriate signs are in place, designating the “truck traffic routes” set forth in section 3-2706 of this Code, the operator of any vehicle exceeding a maximum gross limit of ten thousand pounds shall drive on such routes and none other, except that nothing in this section shall prohibit the operator of any vehicle exceeding a maximum gross weight of ten thousand pounds coming from a “truck traffic route” having ingress and egress by direct route to and from restricted streets when necessary for the purpose of making pickups or delivery of goods, wares and merchandise, from or to any building or structure located on such restricted streets, or for the purpose of delivering materials to be used in the actual and bona fide repair, alteration, remodeling, or construction of any building or structure upon such restricted streets for which a building permit has previously been obtained therefore, or for parking such vehicle in a location for which a parking permit has been issued pursuant to section 3-2709 of this Code.

The city manager may issue permits to vehicles subject to provisions of sections 10.05.370 and 10.05.380 of this Code to park such vehicles in locations off “Truck Routes” as specified in the permit, if he determines that the issuance of such a permit will not result in damage to any city street and will not permit the violation of any city ordinance or state law. The permit shall be issued for a specified vehicle and for a specified parking area, and shall be carried on the vehicle at all times.

Transportation Permits are needed to ensure oversized loads are routed properly through the City. Proper routing avoids accidents due to low underpasses, weight issues and other clearance issues. Oversized loads can also require pilot cars to ensure the public is aware of their presence.

Transporters must also choose their route using City approved truck routes when possible. The truck route map is attached to the Transportation Permit to assist in preparing your route. Trucks must stay on approved truck routes as much as possible to the nearest point of entry to the destination, but you must make sure the route is appropriate based on the dimensions and weight of the load. The transporter is responsible for verifying all clearances prior to making the actual trip.

If you have questions regarding truck routes or transportation permits, please contact Transportation Engineering at (510) 494-

Any additional information may also be obtained by calling the Traffic Unit’s Commercial Vehicle Enforcement line at (510) 790-6771 or visiting the City of Fremont’s Transportation Engineering Department.

Free viewers are required for some of the attached documents.
They can be downloaded by clicking on the icons below.